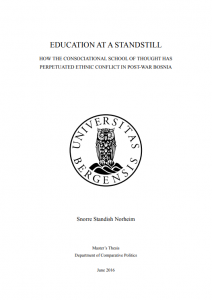 This study set out to explore why the consociational prescription to have cultural autonomy in education contributes to perpetuating ethnic conflict instead of conflict resolving, in post-war societies like Bosnia and Herzegovina. The prescription is to recognise and strengthen the major ethnic groups through decentralisation of decision-making in education. The study analyses a fragmented and politicised educational system, and its consequences for inter-ethnic relations, which are analysed and presented as manifestations of exclusivist, educational protectionism. The single-case study on consociational post-war Bosnia and Herzegovina builds on interview data from a three-week-long fieldwork in Mostar and Sarajevo, in January 2016.

Feedback from the Intensive Dialogue Workshop for … END_OF_DOCUMENT_TOKEN_TO_BE_REPLACED