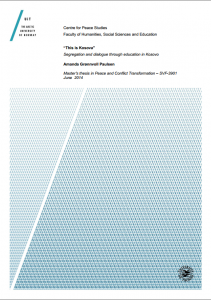 The Balkan region has been a place for conflict ant intergroup bias several times the last 100 years. After Tito’s death in 1980, Yugoslavia started to crumble from within. The economy was in ruin, the question of ethnicity, which had been hidden away during Titos rule, surfaced and wars broke out because of this. Some of the republics and autonomous states in Yugoslavia demanded to be independent. Kosovo was one autonomous state that wanted to be independent. After years of riots and minor conflicts a war broke out in Kosovo in 1999. NATO intervened in the war between Kosovo and Serbia to stop ethnic cleansing. After the war there has been a division between the ethnic groups. The majority of Kosovo-Serbs are living in the north, in a city called Mitrovica. The segregation between the ethnic groups have been so extreme that most of the young people who are growing up now, have never seen or met a person from the other ethnic group. When a society is segregated, and the division between the people is so profound, it could easily turn into a new conflict. There is no communication, so no one really knows what is going on with the other group. To change that I believe one can do extracurricular activities where mixed education I central. By using Allport’s theory of contact and Gaertner’s three conditions for intergroup contact I will look into how and/or if mixed education can help promote long lasting peace in Kosovo.

Feedback from the Intensive Dialogue Workshop for … END_OF_DOCUMENT_TOKEN_TO_BE_REPLACED