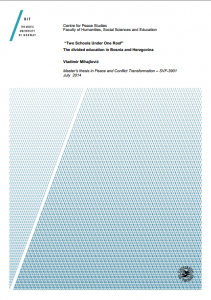 Bosnia and Herzegovina is a multi-ethnic society with three ethnic groups (Bosniaks, Serbs and Croats) comprising a vast majority of the population. The dissolution of Yugoslavia found these three ethnic groups at war with one another, a war that lasted 4 years and claimed around 100 000 lives. The war ended with the peace agreement in Dayton, 1995 that officially established two territorial entities within the country, the Serb Republic and the Federation of Bosnia and Herzegovina (with Bosniaks and Croats comprising most of the population). As opposed to the period before the war, the country was completely split along ethnic lines. The educational system was also divided with different content and curriculums for each ethnic group in what is known as the national group of subjects. History in particular is taught differently to students of different ethnic groups. My goals is to showcase these differences and discuss their possible impact on the young citizens of Bosnia and Herzegovina, establish whether hey perpetuate the existing rifts and tensions or contributes to a more tolerant view of other ethnic groups. I am also intrigued by cases of having students of different ethnic groups sharing the same school premises, yet attending all classes separately. Such cases came to be known as ‘Two Schools under the same roof’. Symbolically, ‘the same roof’ can also refer to the state of Bosnia and Herzegovina and its numerous students of different background learning different truths about their country and historical events that shaped its narrative.

Feedback from the Intensive Dialogue Workshop for … END_OF_DOCUMENT_TOKEN_TO_BE_REPLACED