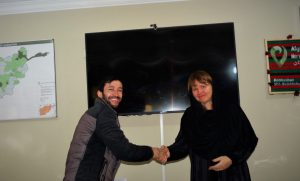 he Nansen Center for Peace and Dialogue are working together with the Afghanistan Committee to strengthen the local capacity for dialogue and conflict management in Afghanistan. Norunn Grande recently returned after an assignment in the war-torn country. “I enjoy spending time in Afghanistan, and people are clearly happy to have us. Every time I am there, I learn something new, but it is hard to hear about the very difficult situation people are living with”, says Norunn Grande.

The first time Grande visited Afghanistan was in 1963. “Back then Kabul was like a big village with horse-drawn cabs and not much traffic. It was peaceful, but very poor. I attended an international kindergarten while my father was working for the UN with rural development”, says Grande. The next time she went to Afghanistan was in 1976.” This time we took the roads from Europe, travelling by bus, traversing the entire country from the Iranian until the Pakistani borders. This was before the Soviet invasion. There was peace and we were able to travel everywhere without any problems. The Afghan people came across as proud and friendly. Back then modern life coexisted with the traditional, and you could see women wearing Burkha next to women in miniskirts. There was a great divide between poor and rich, and poverty was abundant in the countryside. Afghanistan has a great cultural and historical heritage. We climbed the Buddha statues in the Bamyan valley”, Grande reminisces. These statues used to be the highest Buddha statues of the world, carved into the mountain, but were unfortunately ruined by the Taliban in the spring of 2001.

We keep hearing about dramatic events in Afghanistan, particularly in Kabul. During her last visit there was an attack on the Hotel Intercontinental in Kabul. Several people were killed and wounded. Grande tells that the attack on hotel was brutal, lasting all through the night and morning. “The following morning, we understood that many people were killed and injured. We were in a different part of town when this happened, and the only thing that was out of the ordinary was an increase in helicopter traffic. When we watched the news, we saw that the hotel was on fire, we can only imagine how hellish staying there would have been. We remained inside for two days. In the area where I was living things were quiet, and we could hear kids playing on the street outside. I felt safe, and it was nice to stay with people I know well”, says Grande.

A few days after the attack at the hotel, the local Save the Children’s office in Jalalabad was attacked and several people were killed. A week after that another attack happened in Kabul, a suicide bomber drove an ambulance into a crowd, killing more than a hundred people and injuring several hundreds. This was one of the biggest attacks happening in Kabul for a very long time. Things are taking a turn for the worse, and most of the action seems to be centred in Kabul. “Kabul used to be one of the safest places in Afghanistan, but now it has turned into the most dangerous city in the country”, Grande explains.

Conflicts thrive both locally and nationally in Afghanistan, and there is a severe lack of institutional mechanisms for resolving conflicts. This is one of the reasons why people need to be better at handling conflicts both in their families and in society. The Nansen Center for Peace and Dialogue gives trainings in dialogue and conflict management for local employees in the Afghanistan committee. Dialogue and conflict management skills are key for the Afghanistan committee’s work. The participants of the last training were very energetic and engaged in the subjects that were addressed, even if they didn’t agree on everything. One of the things that was talked about was the fact that it can be very hard to admit you’re wrong. This issue was dealt with through conflict analysis and role-playing games where the participants contribute with their experiences. 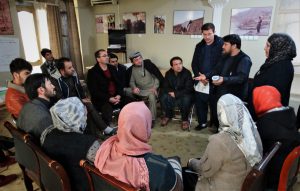 “Apart from the war which has been going on since the Soviet Union invaded the country in December 1979, poverty is by far the greatest problem. People live with conflicts all the time, conflicts within families, conflict surrounding water and land, where to settle schools and other important buildings. Where do we build our school, it’s not unlike the disagreements we have here”, says Grande. Security is very bad and has become increasingly worse since 2007. 2016 has so far been the year with most civilian casualties and wounded, according to the UNAMA (United Nations Assistance Mission). The last couple of weeks has seen several aggressive attacks in Kabul and other provinces. Certain areas are secure but travelling along the highway can be dangerous. Grande had to travel by aeroplane from Kabul to Faizabad in the north.

“In spite of the massive international military interventions since 2001, the war keeps on. There are nearly daily attacks from the opposition, consisting of Taleban, IS and other semi-military groups. The escalation we are seeing could be due to competition between Taleban and IS which is a new group in Afghanistan. Before the Western invasion of the autumn of 2011, the Taleban controlled most of the country. As of now this area has shrunk to approximately 1/3 of the country. People are worn out by war, and many would more than anything like to leave but leaving has become increasingly hard. Many of the people who fled in the autumn of 2015 has been returned. The same thing happens in the neighbouring countries Iran and Pakistan. They no longer want to give shelter to Afghan refugees and deport them by the thousands. The people who are returned are likely to try again”, says Grande.

Since 2003, Grande’s position at the Nansen Centre for Peace and Dialogue has brought her back to Afghanistan on different occasions. In 2003, she travelled along with four Afghans aged between 18 and 25 who at the time were refugees in Norway. For the Afghans this was the first visit to their home country since they escaped. They attended the first Youth Peacebuilding Conference since the fall of the Taliban. In 2006 and 2007, Grande helped arrange a summer school in Mazar-i-Sharif with an Afghan youth organisation. Ever since, the security situation has gradually worsened.

The Nansen Center for Peace and Dialogue cooperates with the Afghan committee on workshops and trainings in dialogue and conflict management. The Afghan committee educates midwives and has extended contact with midwives all around the country. Midwifery is one of few female professions carrying status, and which is accepted by all. This is why midwives have a particular position in the Afghan society. In 2014 to workshops focusing on the midwives’ work were held.” We wanted to explore how they’re able to carry out their jobs when the security situation is as fragile as it is, and how they’re working to increase security for themselves and the local communities. During my last day we worked on their midwifery curriculum on communication, dialogue and conflict management”, says Grande. Dr. Khadja is one of our partners. For several years she has included peace education into the curriculum while teaching midwifery students. Her work is the basis for the peace work and communication part of the midwifery curriculum, as well as the curriculum for other medical professions.

In 2015 The Nansen Center for Peace and Dialogue issued an invitation to a training in dialogue and conflict transformation in multi-cultural communities. The training was a success, and we did a follow-up training in Kabul in November 2016 for participants from different provinces in Afghanistan. Our aim was to increase the competence of people working on village development, specifically within education and municipal governance. At the seminar in Faisalabad this January, Grande received feedback on trainings and activities initiated by the people attending the previous training. Dialogue and conflict analysis has been fully integrated in the training of traditional leaders, teachers, youths and women’s associations in several Afghan Provinces.

“I enjoy staying in Afghanistan”, says Grande.” People are friendly and gracious, and clearly happy to have us, and for new input. Every time I am there I learn something new. Listening to the stories people share and learning about the hardship they face can be very challenging. Getting to know people and working with them as a privilege, but it is hard to fully internalise the extremely demanding conditions people live under. Many have lost members of their family and live with the fear that something will happen to other family members, friends, colleagues and themselves”, she tells.” For me the hardest thing to get used to is the lack of freedom of movement, brought on by the tense security situation. It’s a constant backdrop, knowing that things can happen. We keep the security issues at the forefront of our minds and take appropriate precautions when we move from one place to another. I never stay more than two or three weeks at a time, so for me this is not a great problem. But the people living there have this constant fear”, says Grande.

The current situation in Afghanistan is dominated by war and local conflicts, and the constant fear of attacks puts its toll on people’s day-to-day life and the communities. “The fall of the Taliban gave people an optimistic outlook on the future, but this has gone”, says Grande. The security situation has been bad for a very long time, and people are losing faith in things improving. The government can’t control the situation, and the Taleban is gaining territories. There has been a modicum of economic development due to the expansion of telecommunications, but is not sufficient, and the country remains dependent on aid while spending much of their resources on the war.

“At the moment the future in Afghanistan does not appear to be bright, but if we cast our gaze forward I think things can get better”, says Grande. The people who attended the training we held in Faisalabad keep on working, and they get results. They work on improving communication, and they come up with new and creative ways of solving frozen conflicts. Therefore The Nansen Center for Peace and Dialogue is so happy to be able to contribute to this work and do our bit towards a positive development amongst people and local societies in Afghanistan. “When the conflict subsides the people of Afghanistan will be able to create a sustainable society. The competence building we are contributing towards helps create a foundation for it. And right now, we’re able to achieve much in local societies because of the huge motivation driving the Afghans towards positive change. This was clearly demonstrated at the recent Faizabad training”, says Norunn Grande.

Feedback from the Intensive Dialogue Workshop for … END_OF_DOCUMENT_TOKEN_TO_BE_REPLACED