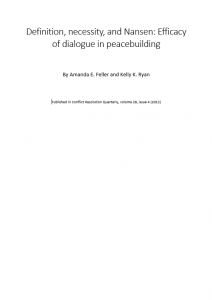 In international conflict resolution the term dialogue is used frequently while lacking specificity. When examined in practice, dialogue is revealed as a specific, efficacious method for conflict management and peacebuilding. This article defines dialogue specifically through description of eight characteristics: coexistence; movement; encountering the “other”; assumption; creativity and flexibility; sharing; holistic; and multigenerational. In defining dialogue, a parameter is drawn and a method clarified. The case of Macedonia and the Nansen Dialogue Network (NDN) is drawn upon to illustrate these traits and the success of the method in long‐term conflict management and peacebuilding. NDN has used its dialogic approach in Macedonia, leading to integrated schooling. As integrated schooling has continued success with NDN as an ongoing dialogue facilitator, as of 2011 the Macedonia government is considering it as an educational model. As evidence of further success, this dialogue work has led to continued funding as well as peace‐related awards and nominations to NDN. Understanding the nature and success of dialogue as practiced is an essential, though often overlooked, aspect of international relations work.

Feedback from the Intensive Dialogue Workshop for … END_OF_DOCUMENT_TOKEN_TO_BE_REPLACED